April 18, 2018: It's that time of the year again! Exams are on, stress levels are at an all time-high, and students are shuttling between exam halls and their houses, revising subject matter at all times, hoping for only the best results to all their hard work. The CBSE board exams started on the 5th of March 2018, all over the country, and were conducted for both, classes 10th and 12th. The examinations went on till the 4th of April for class 10th and the 13th of April for class 12th. Due to exam paper leaks, the class 12th exam for economics will be conducted again on the 25th of April 2018.

It's been a pretty uneventful year for the board at the starting of the year, with most announcements being on schedule. There was a tiny delay in the announcement of the time table itself but the admit card release was on time when it was released in February, early this year. Of course, there were a few tiny controversies, one about the examination schedule that CBSE released and then revised for Class 12th, and two, the advisory that the board published, warning schools against the practice of withholding admit cards or charging a fee to do so.

Name Of Examination Authority: Central Board Of Secondary Education 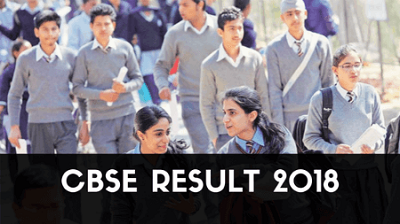 In a new move this year, the board also granted some concessions for Candidates with Special Needs (CWSN) including allowing the use of computers for students depending on their actual need and skills, provision of reader in case the candidate does not want a scribe, and relaxation in mandatory attendance up to 50%. The board allowed students with diabetes to carry eatables with them during the examinations.

In an unexpected turn of events, on 28th March 2018, CBSE announced the re-examination for two papers, the Economics paper for class XII and the Math paper for class X. This announcement came in the midst of rumours of paper leaks. The board announced a police probe following while widespread questioning of school children, tutors, and other individuals has taken place. Students across the country have protested the announcement of re-examination, with online petitions against the retest and students taking to the streets.

After an update on 29th March 2018, Thursday from the Union HRD Minister that the re-test dates would be announced on 2nd or 3rd of April, 2018, the Central Board of Secondary Education on 30th March 2018, announced that the CBSE class 12th Economics re-exam would take place on the 25th of April, 2018. The class 12th exam is scheduled to be conducted for all students except those studying abroad.

On Sunday, 1st of April 2018, the board also announced that it would be postponing all examinations scheduled for 2nd of April 2018, in the state of Punjab, after receiving a letter from the Director General School Education of Punjab Government asking the board to postpone the exams due to apprehension of law and order problems and other disturbances, because of the call for Bharat Bandh. The exams scheduled for class 10th for 2nd April, 2018, were French, Comm. Sanskrit, and Urdu Course B. The exams scheduled for class 12th for the same date were Hindi Elective, Gujarati, Nepali, Kashmiri, and Hindi Core. The next date for the examinations was announced in April and it was decided that the exam would be conducted on April 27th 2018.

This year the results for the CBSE board exams, for both 10th and 12th classes are expected to be out in May 2018. The detailed time table for both the classes can be found here (class 10th) and here (class 12th). To stay updated about all the notifications about the board exams, and to check your results, you can log on to the official CBSE website, the ExamResults website, or download our Android App.

Last year, both the exams for classes 10th and 12th started almost a week later than usual because of the assembly elections that were being conducted in 5 Indian states, Punjab, Goa, Manipur, Uttarakhand, and Uttar Pradesh. Concerns about a later-than-usual result came true when the CBSE class 10th result was only announced in May, and the class 12th results were delayed to June. This year, the results are expected to stick to regular schedule and be released in May 2018.

While the exact result dates are still not out as the Central Board of Secondary Education has still not released any official confirmation, ExamResults will stay ahead of the curve and update any information we receive and also publish the result here. Along with the results, we also publish information like name-wise results, pass percentage, number of candidates, gender-wise pass percentage, names of toppers, etc. 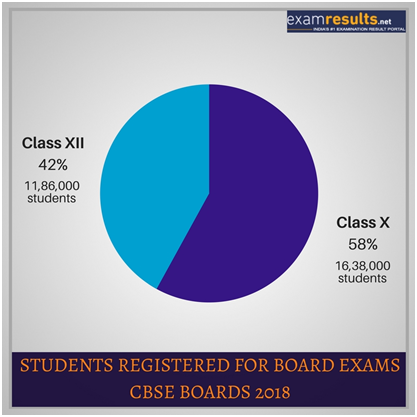 CBSE students, this year onwards, also had access to an observation system. This system allowed them to provide feedback and comments on the question papers within 24 hours of giving the examination. The feedback would be considered by the expert group responsible for preparation of the marking scheme.

In 2018, the CBSE 10th Result 2018 and 12th Class Result will be published on this website. Students can also check their results on official CBSE websites. Students appearing for the examination will also be able to check their results and stay abreast of all exam-related notifications through our Android App.

Last year, as many 27 lakh students appeared for the CBSE board exams at almost 4000 centres across the country. The board had identified 3974 centres for class 10th and 3503 centres for class 12th. This year, too as many as 28 lakh students appeared for the exams. The results for the class 10th and 12th boards are expected in May 2018, and students can follow the steps listed below to check their results. Our Android App will also give you all the updates and notifications about the CBSE results and also allow you to check the results as well.

In order to check your CBSE results for class 10th and 12th, you can also use the following methods:While waiting to receive the original mark sheet from your school, as issued by CBSE, you can download a provisional copy of the same on this website, and then take a printout of the same. This will help you continue with your admission process, after school.

Since this mark sheet has not been issued by the board, it will be considered provisional, and does not replace the original mark sheet as the authorized document.

Since 1992, for the first time this year on, the practice of moderation that the board has practiced will be stopped. This is to decrease the increasing instance of high cut-offs at universities (especially DU), in the past few years. This move is expected to have an impact on the results this year.


Another change that the board has made to the marking scheme this year is to relax the required overall pass percentage for class X students. While earlier students had to score 33% marks in internal assessment and boards separately, this scoring scheme has now been relaxed for 2018. 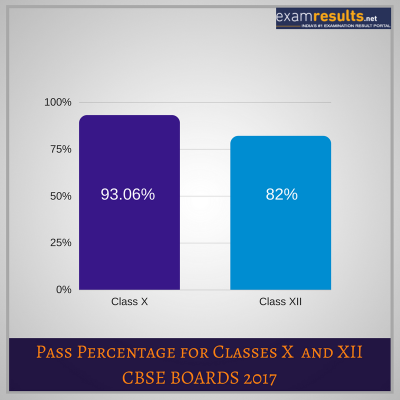 Where To Check CBSE Exam Results for 2018

Students who've already given their class 10th and 12th exams currently can check their CBSE board exam results 2018 on the official website, cbseresults.nic.in or on examresults.net. Students can also check their results for class 10 and 12th via our Android App, ExamResults.

Bookmark this page using the keyboard shortcut Ctrl + D to refer to this page and check your results and other exam-related updates. All the Best!

The apex board of education in India with not just a pan-India jurisdiction but also a global presence with nearly 141 affiliated schools across 21 countries, CBSE grants affiliation to schools up to higher secondary level and develops common curriculum keeping nationwide requirements in focus. You can get all the information you want about this apex board here. Given its present name in 1953, the Central Board of Secondary Education or CBSE was reconstituted in the year 1962 after its jurisdiction was expanded. The board is regulated by the Ministry of HRD, currently headed by Mr. Prakash Javadekar.
Class 10 Time Table
Class 12 Time Table
Top
Bookmark This Page

Register to get your Result
X